From Voipac Wiki
Jump to navigation Jump to search

On this page environmental stress testing results of iMX6 TinyRex Development Kit are displayed. Detailed instructions how to setup boards are also shown.

All of the modules used standard specification except of the temperature ranges for the key components as described below:

All of the tested development kits used standard configuration of iMX6 TinyRex Base Board with extended temperature range (-20°C to +85°C). The majority of tested kits used a standard heatsink. This heatsink sized 35x35x10mm is included in every development kit package. Thus these measurements show the actual performance of web shop based configuration. Some of the boards were mounted into a custom build iMX6 TinyRex aluminium case.


The setup in the environmental chamber: 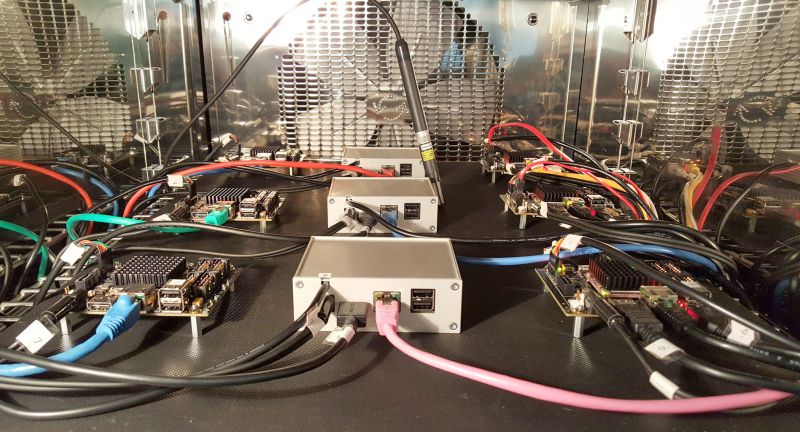 Three iMX6 TinyRex Development Kits (one in Max, one in Pro and one in Basic version) were running full peripheral test and stressed all the peripherals in different range of temperatures. All the rest of the boards were running CPU and memory tests to check the reliability and stability of the firmware and hardware design.

USB flash devices and SATA hard drives were placed outside the environmental chamber. All the scripts running during the test and the board setup instructions can be found in section How to prepare the test.

The picture below shows the temperature profile during the whole testing process: 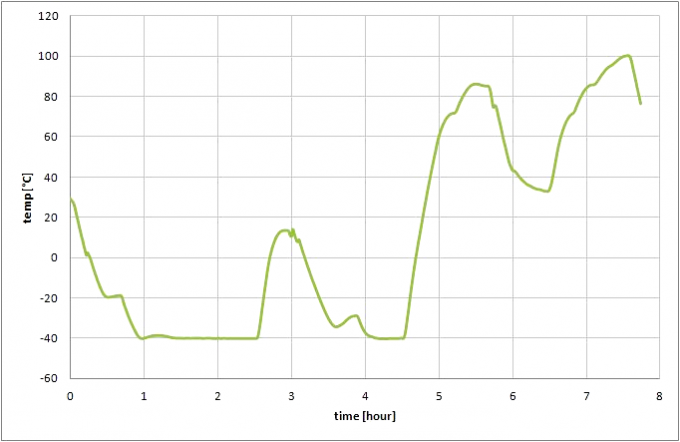 A closer image on the temperature chamber displaying the minimum temperature is shown below. These readouts are available on the display: 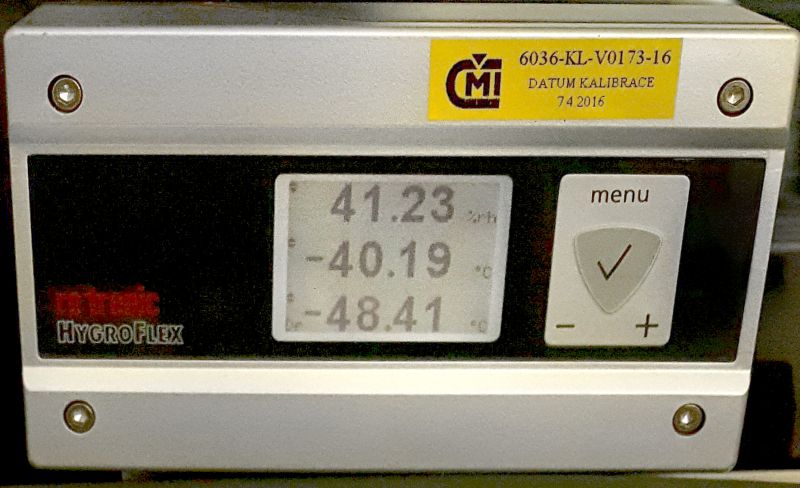 Test description: The ambient temperature was gradually increasing (from 60°C up to 100°C) while CPU, Memory and peripheral stress tests were running. The moment when CPU frequency had decreased was used as a test threshold (this occurred when CPU temperature reached +70°C up to +100°C). Components used for iMX6 TinyRex Base Boards were only rated from -20°C to +85°C operating temperature range. 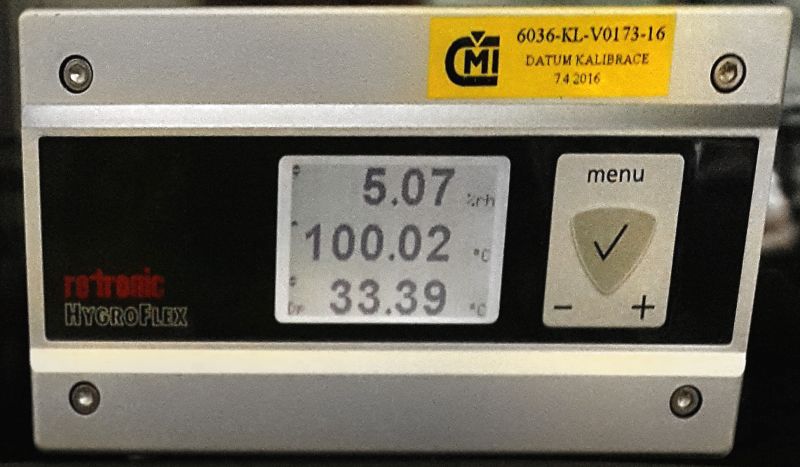 Test description: The ambient temperature was quickly increased from -40°C to -10°C and then back to -40°C. The boards were running CPU, Memory and peripheral stress tests. All the boards were working correctly.

Test description: The ambient temperature was quickly decreased from +90°C to +30°C and back to +90°C while running CPU, Memory and peripheral stress tests. All boards were working without errors.

Thermal camera focused on the boards as the set temperature inside the chamber reached +85°C: 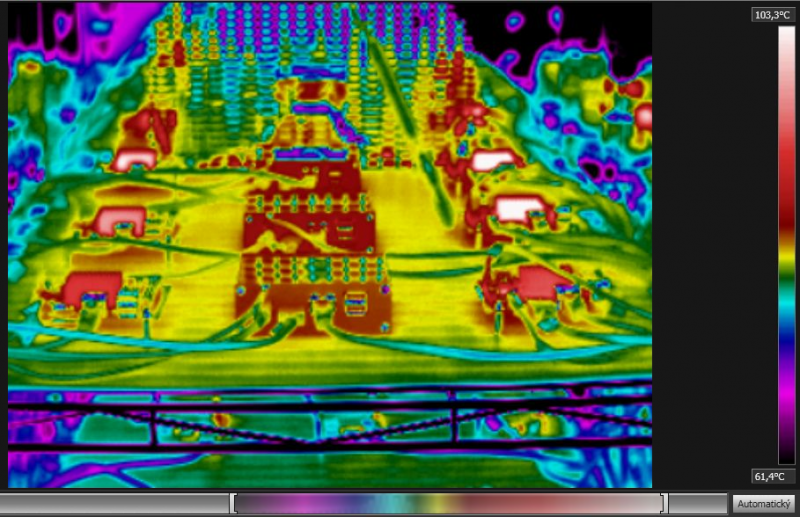 Test description: At temperatures from -30°C to -40°C the boards were switched OFF, left OFF for at least 5 minutes (to cool down completely) and then switched ON to see if they boot up without problems. Once booted up into Linux, the boards were turned off again. All of the tested boards booted up successfully. This test was performed 3 times at -30°C, -35°C and -40°C temperatures.

Test description: As mentioned above, different heatsinks and enclosures were utilized in order to compare the cooling abilities. All these tests were performed with Max version which generate the most heat by itself. All setup reached temperature +85°C in the chamber while still successfully running. The board in the enclosure with the biggest height and cooling fins on the top size reached +100°C.

During the test DHCP and FTP servers were utilised. The PC was also used during Ethernet ping test while controlling all the boards through SSH and serial console sessions. The control computer was running Windows 7 operating system.

Disable firewall (PC will not be connected to the Internet) and setup a static IP address: Press Windows button -> go to Control Panel -> Network and Internet -> Network and Sharing Center -> Change adapter settings (on the right side in the bar) -> double click on Local Area Connection -> Properties -> In the tab Networking go to Internet Protocol Version 4 (TCP/IPv4) -> type the static IP address and subnet mask as shown below: 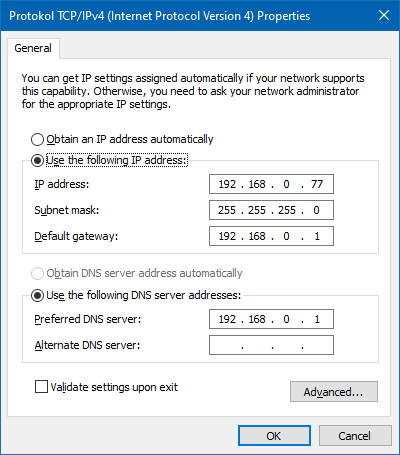 iMX6 TinyRex Development kits and the control PC are connected via Gigabit Ethernet switch. To ensure correct IP address assignment, turn on the PC first, connect it with the switch and only after that turn the switch on. To be able to download the files from the FTP server, sharing option need to be enabled first. This can be done by setting up the network as a work network. Sharing can be enabled in Control Panel -> Network and Internet -> Network and Sharing Center -> Click to Choose homegroup and sharing options: 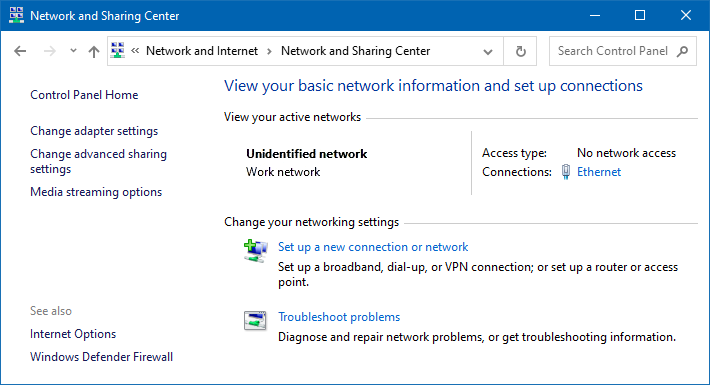 Setting up the TFTP and DHCP servers

Tftpd32 software supports both TFTP and DHCP server options. For more details about DHCP configuration, follow the screenshots below: 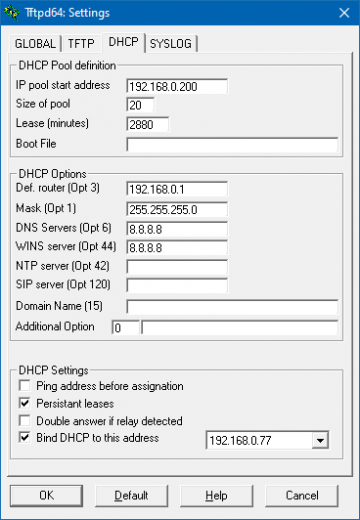 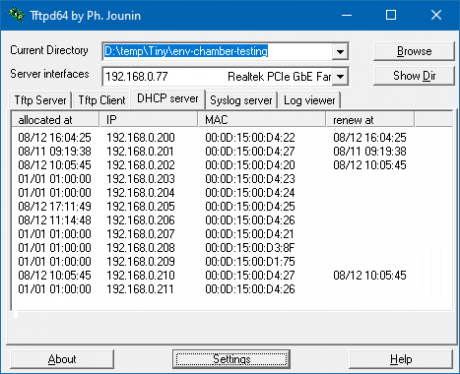 To control iMX6 TinyRex Development Kits, one TeraTerm serial console was opened per board. SSH clients were used to read temperature. For the boards with the peripheral test, an extra SSH client was established to be able to spot possible errors or warnings if occurred. 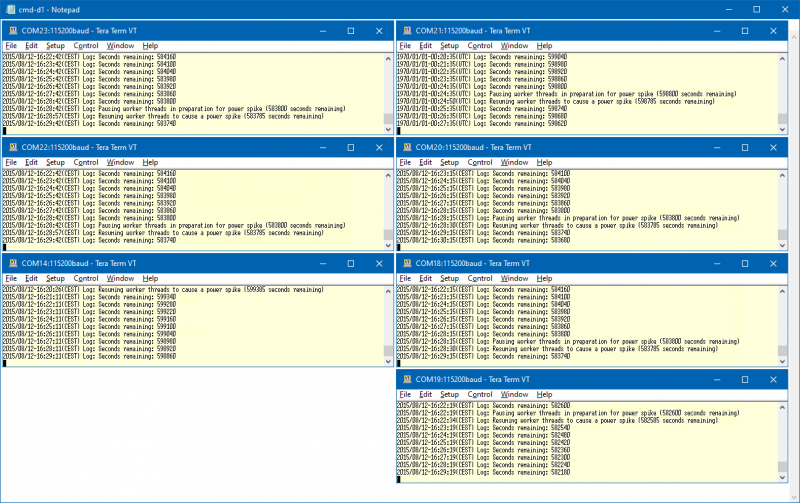 The setup of the environmental chamber cables and out-of-chamber equipment: 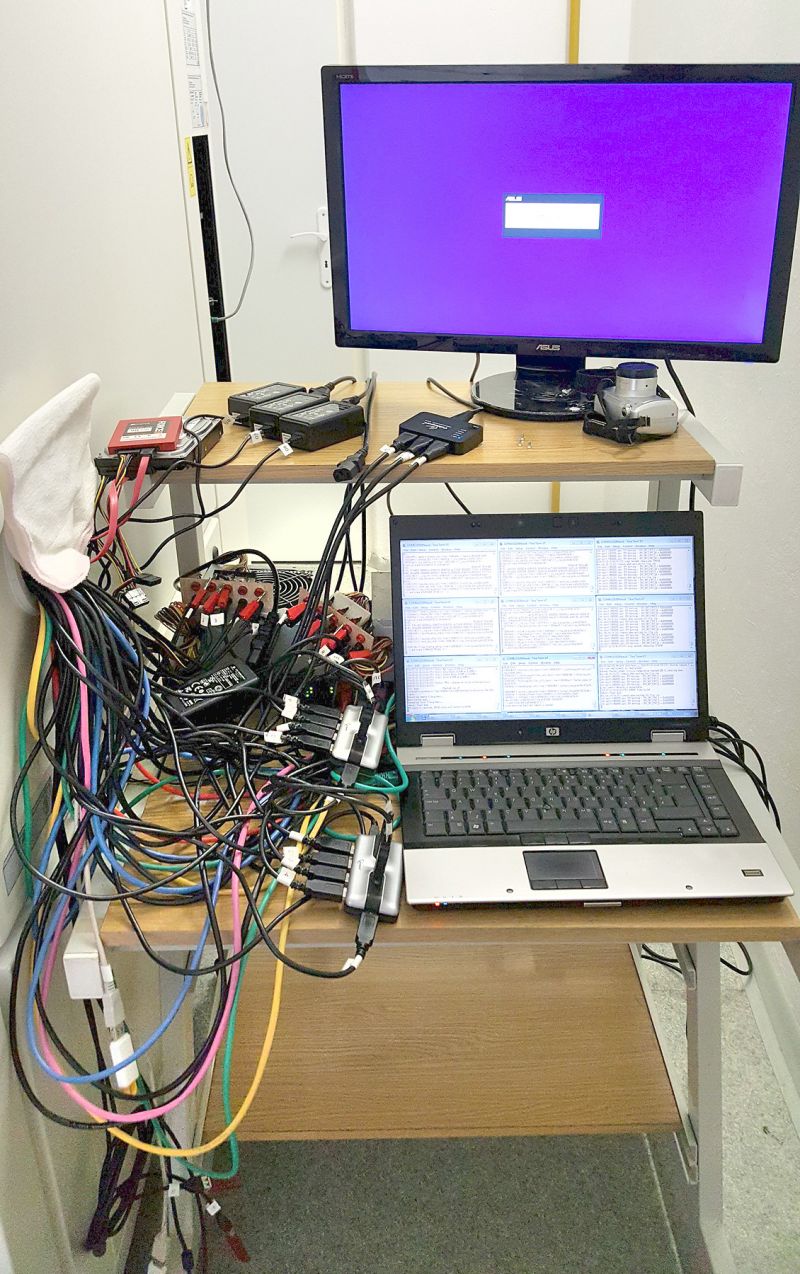 SD card was selected as a booting device for all the boards. U-Boot settings were not adjusted as the default configuration was used. The only change compared to standard software package was running a multimedia filesystem. To prepare a fresh SD card follow these instructions. Here is an example of creating a SD card suitable for Max configuration:

Stressapptest package was selected to check CPU and memory integrity. Placing this file into the same directory where the testing script will be stored is important:

To be able to check the CPU temperature every minute a new cron job was setup. For Ubuntu file systems postfix package installation is required:

To setup a cron tab, the file containing all cron jobs needs to be altered. Before running the crontab for the first time, selecting a text editor is required:

Paste the following line to the end of the cron list file. The output time format will be set the same as for stressapptest. Cron job performs a current CPU temperature readout and the data are saved in the log file. The log format was selected identical to the one used by stressapptest package:

Note: The percent sign '%' has a special purpose in the cron file. As this sign is needed to write the date formats, the backslash is required to be placed before the percent sign: '\%'.

Setting up the date

If the master PC is equipped with a timeserver, server date and time can be automatically obtained using this Linux feature:

Open one SSH client per board where CPU temperature will be shown. Tail command is utilized to display the last part of the log file, which is filled up as the CRON job outputs the current readouts:

To make sure tests are running smoothly, potential errors can be detected by opening another SSH session:

To be able to test HDMI Input during the peripheral testing, a video file was played from boards which were running memory stress tests only. Infinite loop is opened in another SSH session:

Navigate into the directory, where stressapptest feature and test are stored.

The testing script uses multiple variables to specify its operation. As the first parameter board configuration is used (-max, -pro or -basic). As other parameters device names are written in the following order: the first USB stick, the second USB, SD card and SATA drive (if used). All logs are stored into a single file.

The complete script can be found in the download section or down below:

The original article can be accessed on the iMX6Rex.com website.